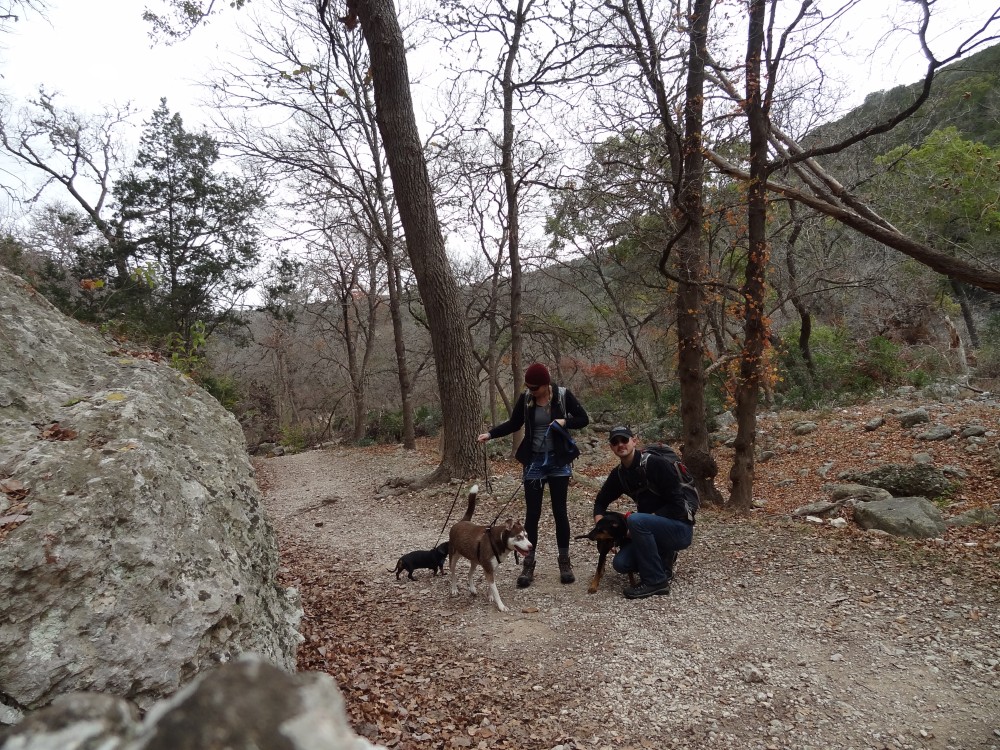 Who:
Me, Thom, Meeka the eight year old dachshund, Echo the Malamute/pit bull (in her prime), Vega the giant Doberman puppy.

Where we stayed:
“Peace of Heaven” cabins, Vanderpool, TX
– no TV, no signal on Verizon. Slow Wi-Fi available.
– equipped with cooking utensils, more beds than necessary, and an old monopoly game.
– dogs are allowed with a fee per dog per night.

What we saw:
-Lost Maples state natural area. We went in the evening without dogs, came back in the morning and hiked the east trail with dogs. This is, theoretically, the best place in Texas to see color changin’ leaves. The colors were maybe not at their peak, but still pretty good. We didn’t make the whole trail loop, because it got pretty rocky and steep, and it was hard to keep Meeka from jumping off things. (She’s not allowed to jump on and off of things since her back incident.) But we did walk about three miles. Echo swam in each creek crossing too.

– Garner State Park. The geography is really cool, but this park is maybe geared more towards family camping. We walked along the river and climbed in the rocks. They have a hell of a gift shop; I bought a sweatshirt.

– Enchanted Rock State Park. We stopped here in the way back. It was totally worth it, both for the landscape and because the dogs slept the rest of the way home afterwards. I had seen pictures, but it was quite a bit bigger than I had imagined. We took the dogs up the summit trail. Meeka wants you to know that she made it all the way by herself, and had the energy to play with a baby at the top. Vega wants you to know that it totally wasn’t her that took a crap on the top of the rock.

Unsolicited Advice:
When staying in this area, don’t waste your time trying to grocery shop in Vanderpool or Utopia.
The Vanderpool general store is just fine if all you really need is a convenience store- gas, drinks, maybe a single forgotten grocery item. The lady working there was also really nice and opened the doors for us just after close, which kind of saved our day.
The Utopia general store was a waste of time. The produce wasn’t really in consumable shape, there was a thick layer of dust everywhere, and process were extreme. I can’t imagine that locals actually shop there; I would assume that they just drive about 45 minutes to the town with an HEB every few weeks.
The solution to this issue is The Leakey Mercantile in Leakey. The produce was actually fresh, the store is surprisingly big with a good selection, and prices are only a little higher than Kroger.

What I didn’t expect:
Even after living in Dallas for about five years, and having visited Austin, Houston, San Antonio, Port Aransas, and El Paso, it still struck me how varied Texas really is. I also didn’t realize how close to mountains the hills of hill country really are. There’s a lot more prominence and exposed rock faces then I had envisioned.