Before I shaved my side, I did a lot of careful research, trying to find out how it would look worn in other ways aside from down. Examples are out there, but its a hard thing to find on purpose. So now that I’ve had my side shave for awhile, I decided to do a provide a public service by collecting some of the different ways I have worn my hair recently. (I know that the public is dying to know what a pony tail looks like with a bald spot on the side of the head…) In the interest of showing how this really looks in real life, these are not from a carefully planned and controlled photoshoot; these are just Droid camera shots of how I actually wore my hair on various days. There will also not be a lot of interesting makeup variety; these were all taken while I was having eye issues, so I couldn’t wear eye makeup.

I repeat- the moment you’ve all been waiting for has arrived. You finally get to see what it looks like when a flat-haired slob with messy eyebrows fixes her own hair, in real life, with no eye makeup, despite her hair styling disability – with the side of her head shaved.

Basic- Down and (Mostly) Natural

This is the basic way my hair looks most days. My hair texture is flat and smooth; this picture actually has a bit more body than I have naturally, because I blow dried a little kick into the ends. This outfit is actually not slobby as you might think at first glance. Its actually a cutting edge style called “slob chic”.

It was actually surprising to me how not instantly apparent the side shave is. I usually do it with a #1 guard, and at that length, from a distance, I think it just looks like hair. I did it with no guard once, and I wasn’t a fan of it because it itched, and made all of my scalp zits apparent. That was a little more in-your-face shaved side.

The “I’m At Work” Side Knot 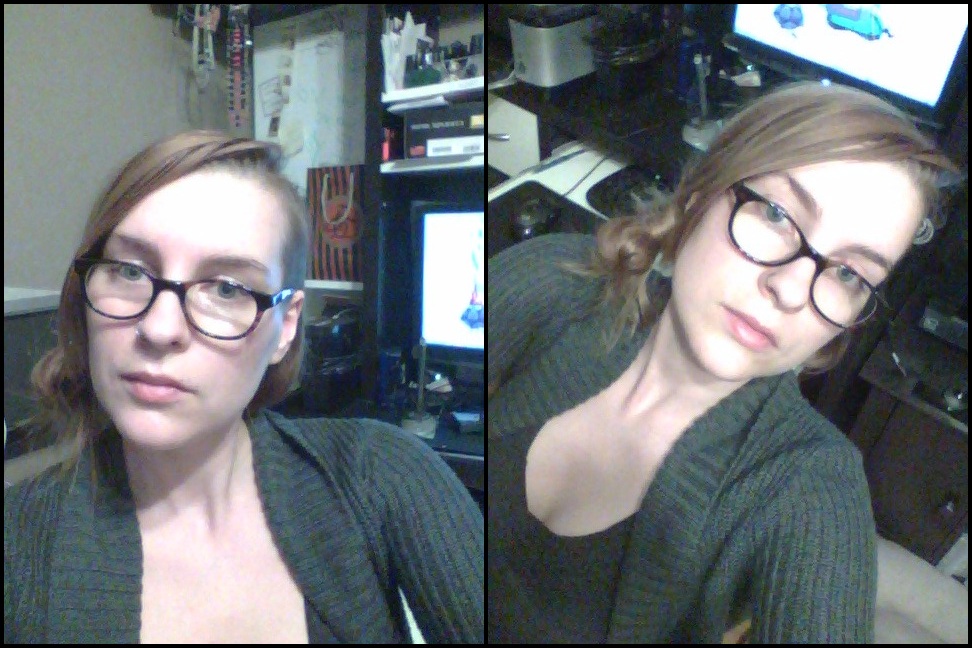 …Except I’m not at work in these pictures. To get this style, I essentially grab a handful of it at the side of my head, and make it into a pony tail without pulling the end all the way through. The I wrap the ends around the pony tail. I do this when my hair is in my face, in the way, feels like a giant damp dead animal, or is basically crazy.

This is how I can make my “down” hair look better with a little more effort, without looking like I’m putting in very much effort. The waves are done with a Bed Head “Wave Artist” Deep Waver.  It took some experimenting to learn how to make waves that don’t look decidedly deliberate and unnatural. The technique I usually use now is to start the waves lower on the hair, and hold each “bite” longer as I go towards the ends. So I hold very briefly at the top, about a second in the middle, and maybe 3 seconds at the end.  I still don’t think they really look natural, but I’m not always going for natural. 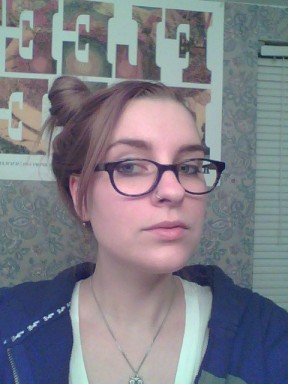 I’ve always done my top buns canted to the side, even when I wasn’t bald on the side. So no, it doesn’t have to be off center because the side is shaved. I just like that look better. My standard top bun is done by pulling it into a tight, slightly off-center ponytail, and then twisting the tail and winding it around the base. It takes 2-3 bobby pins to hold. I’ve not had much success with any of the fancier versions of top bun, and the messier top bun doesn’t look carefree and full of body on me. It looks messy and ragged, with odd lumps, because my hair does not have an ounce of wave.

The big question is probably “Can you hide the side shave?” The answer, at least in my case, is yes. I just part it on the other side. In this picture, you are looking at the side of my hair that has stubble under it. This might not work if you have thin hair; my hair is flat, but there’s quite a bit there.

Top Bun with Braids and Feathers

This is the off-kilter side bun again, this time with ornamental braids and feathers. The braids originate from the “corner” of the shaved area and from behind the ear on the other side. The feathers are tied in with craft string. I wish you could see more in the photo, but I hadn’t yet decided that I was doing a hair gallery when I took this, so I wasn’t careful.

This is what happens when one googles pictures of the Spice Girls before going to bed. Or gets nostalgic for Nintendo and then does not wash hair in the morning (for unrelated reasons). Chun Li, if I have to spell it out for you, is a character from Street Fighter who has pigtail buns, although hers are covered. These are also off-kilter, because that’s how I roll. The part in the back has to be fudged to keep the buns of near equal size. Basically the right bun is all the hair remaining on my right side, and most of the hair from the back. The left side is basically just the hair from the left side of my head. This works out well because I never like the way my part looks in the back anyway. It always looks.. greasy.

Up in a Preppy Clip with Ends Crazy

This is just twisted in the back and clipped with a “preppy clip”. The ends are left to do what they will. I told you already, I love the 90s. I also braided the corner strand again and left it out. 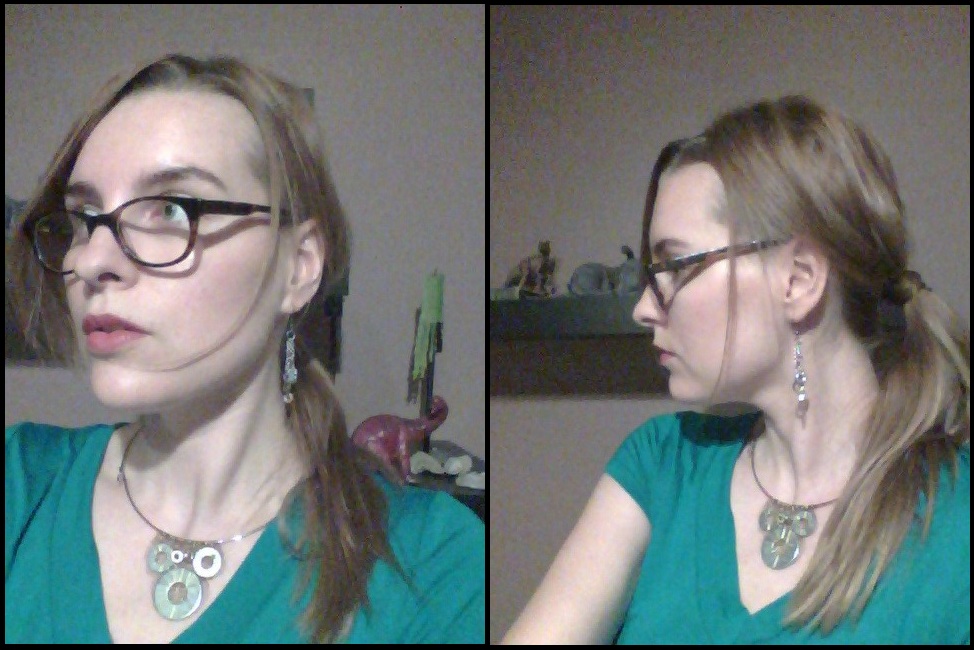 This is the pony tail way to hide the side shave. You can see it, if you look closely, but generally people don’t expect to see it, and they just see what they expect. Its great for getting pulled over, court dates, trying to look respectable when picking up your child from all the best preschools, ect. (As if I know anything about preschools.)

Half Up, with a Bump

Some days I want to go for a Brigitte Bardot thing, but this is about all the volume my hair does without being severely abused. I’ve had it teased into a full on puff ball, but that was against my will, and it took a full bottle of conditioner to undo. I have a policy of not pushing my hair very far beyond its intended shape. (Color is a separate matter.)  For this I just teased the top back a little and fluffed it with hairspray, then pulled the top section back into a ponytail. The head band is just a piece of old trim from my sewing stash, tied around my head. The side shave is visible, but it doesn’t  really affect the style much.

Letting it Fall Where it Will, with a Barrette

I didn’t style my hair on this day, I think I did blow dry it a little since the ends have some movement. When it started to get in my eyes, I stuck a barrette in it. The barrette is just a cheap metal Goody one that I spray painted with blue metallic paint a long time ago. (I also have some spray painted bobby pins from that experiment.) You can see that my eye is messed up in the second picture, how cool is that.

This differs from my standard top bun in two ways. First, it doesn’t have a pony tail in there somewhere – I just wad and twist the hair up and pin it in place. Secondly, I do this bun when I don’t intend to have my hair up all day. Its actually more of a styling tool than a style. I wear this at work all day, and then…

..When I take down the Granny/Semi-Geisha, I shake my hair out and then I can go out with the Cheap Bodywave. Its a little different each time, but its always more body than usual for me. I usually take the bun out and redo it several times a day, because this seems to make the wave more even in the end. Sometimes the result is more heavy on wave, sometimes its just a bit of a body boost.