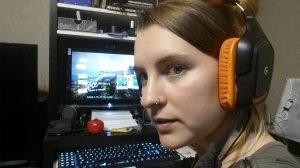 I initially just bought the first episode of Life is Strange – I guess I was being tentative. I quickly realized though, that I was on that ride and staying there. When Episode 2 came out, I sprung for the rest of the season. It continues to be one of the best games I’ve recently played, and it continues to force me to make emotional connections to the songs on its soundtrack. If there’s a vinyl, I’m buying it.

I don’t want to spoil anything just yet, so I need to limit my commentary on the game for right now. But I will say that I’ve been surprised to hear that the game was getting some backlash from who ever those people are who backlash against things that they see as too feminist. I don’t see it as particularly agenda pushing, its just a story with main characters who are female people.

For more on the origins of Video Game Visibility Project, see the first post here.

– I must post a picture of everything gaming related I buy until my next birthday. That includes games, consoles, clothing, peripherals, gaming related books, whatever.

– Things that are purchased on my behalf also count. In the case that I receive a  gaming related gift, I also have to post it, as my existence was a motivator for that purchase.

– If I buy something used I must still post it. I know that buying used is controversial in the industry, but part of the point is to collect an accurate picture of me as a consumer. If I buy so much used that it makes some one conclude that I’m not a good customer, so be it. I’m actually not sure if I buy a significant amount of used items, so its an experiment for me too.

– Both the product and me have to be visible in the picture.

– The picture has to be accompanied by some notes – what the product is, what motivated me to buy it, where I bought it, and a quick note about what the buying experience was like. (Edit: I’ve reduced this to what makes sense in each case, as I found myself writing a ton of detail that wasn’t interesting in some cases.)

– I have to post the images and notes on my blog, categorized properly, and link up on Twitter and Facebook. (And Instagram if I can find a good way to do those posts since there isn’t full link functionality. ) I also have to #hashtag them, although that is something that will probably evolve, since I haven’t settled on what I think is a really perfect hashtag. #IAmACustomer? #PurchasingPower? #PurchasingGirlPower? Not sure. I will consider using sensationalist titles. 😉

– If anyone else would like to do a similar project, or even just post a single pic, I encourage that and will link up, etc.