Once again I’ve let this get backed up. So here’s a post to catch me up before I go buy more video game things today!

Why I bought: So I could buy more PS Plus

Where I bought it: Kroger

What it was like: I dug around on the Kroger gift card rack for awhile. I wanted to just buy the PS Plus card, but they didn’t have it. So I just bought the PlayStation Store card. I bought Plus with it, and now I have a couple stray bucks on my account. We rode our bikes to the store that day. I also happened to be wearing an Evolve shirt.

Wii U – to play Bayonetta 2

Why I bought: So I could play Bayonetta. Some of the other Wii U games look cool too, and I’ll probably play other things, but this purchase was Bayonetta centric.

Where I bought it: Nintendo Online Store

What it was like: Lets just say I can’t give the Nintendo web shop any awards for user friendliness. 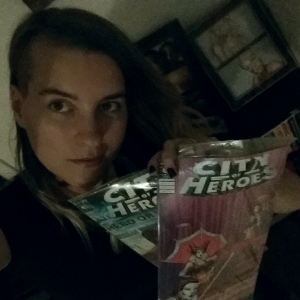 What: City of Heroes Comics

Why I bought: I’ve decided to collect things from defunct or disgraced MMOs. (I’ve been slowly working on this for awhile now.)

Where I bought it: Half Price Books warehouse sale.

What it was like: I think I paid fifty cents each. The sale was hard to shop because it was just so massive and disorganized and overwhelming. The comic section had people crawling all over it like flies, but I did manage to find these. I haven’t decided whether to open them and read them or leave them sealed.

Bayonetta 2 – to fulfill my destiny 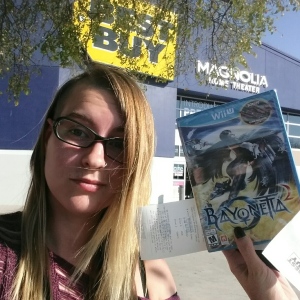 What: Bayonetta 2 for Wii U

Why I bought: I bought a console specifically to play this game, so I figured I might as well buy the game.

Where I bought it: Best Buy. My favorite GameStop was out. 😦

What it was like: Best Buy is a strange place and I never go there any more. Their game section is haphazard. I had to ask at the counter to get this. The employee was nice though.