These are the pictures that someday kids look at, and conclude that they were born too late, and missed the days when everything was wild and free. Just like those photos of my uncle Dean in cowboy boots and underwear, canoeing the Current River… 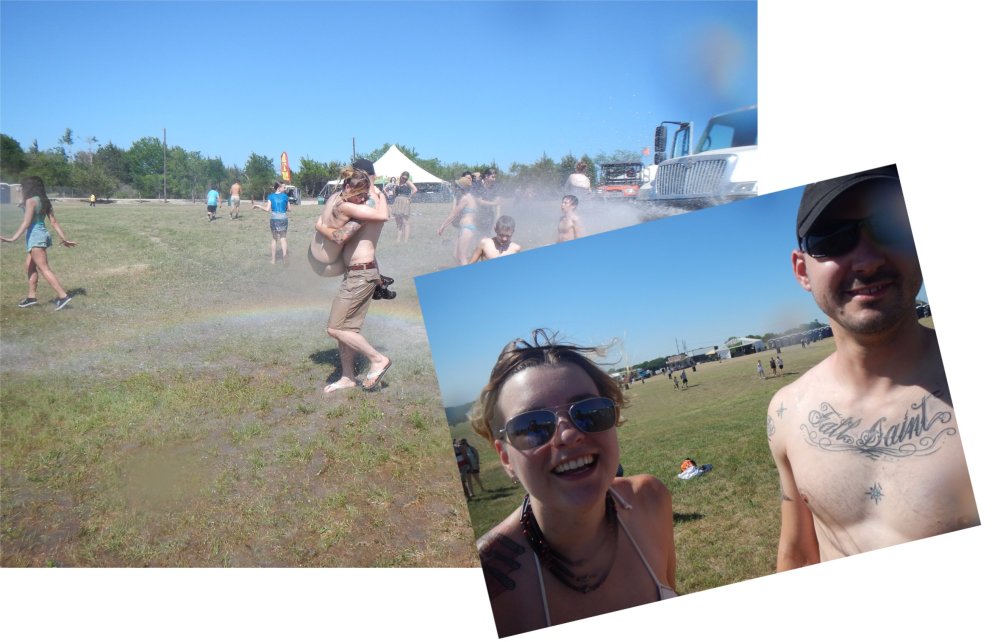 Hailed by the aging Rolling Stone magazine as a festival to see this year, and reviewed by various illustrious outlets as “actually” having some good bands, the first ever Suburbia festival was held in the field in which I usually walk my dogs. Despite the dubious honor of being recommended by the magazine whose better days include Brittany Spears’ exposed bush, Suburbia turned out to be worth the bike ride.

Logistically the event was appropriate to its namesake: convenience embodied. While the crowds were likely as small as they will ever be (assuming there’s a Suburbia 2015), the crowds really didn’t qualify as small. Still, there was a remarkable lack of waiting to enter the festival, buy merch, intake fluids.. or output fluids. To spell out what was implied in that last statement: there were enough porta-potties. Enough, in fact, that by the end of the day Sunday, they weren’t even that gross.

The stages – Meadow, Prairie, and Cedar Room, were set out just the right distance apart. There wasn’t sound contamination between the stages, but the walks between them weren’t too far either. Meadow was the most visible, with its back to the bike path, and looked out on a large, open expanse of slightly sloping field. Prairie sat at the top of the slope, forming a little cove between the stage and private pasture land. Cedar Room was the most ingenious use of landscape, sitting back in a cedar grove, separated from the others by a fairy tale walk through the pines.

The one point worthy of complaint was the early lack of free drinking water. While there’s no question that festivals don’t pay for themselves, heat stroke deaths in the suburbs aren’t conducive to getting to throw the party again – I guess this point was eventually taken, and partially through Saturday, a free water refill station was introduced.

Among the highlights: Ume, (which is actually pronounced “Ooh-may” and not “oom” like I had originally thought) who brought hair banging into the daylight early on Saturday. In a way I wished a later slot for them – they deserved the crowd reaction that evening would have brought – but I couldn’t complain about my ability to grab a spot on the rail in front of the stage. Meg Meyers raged while her electric cello player calmly bowed away. Big Gigantic’s constant crescendo inspired hundreds of pointlessly pointing hands waving wildly in the air. Alabama Shakes’ wails drifted across the field to the woods as the air got cool on the first night. Hayes Carl mourned his liver, Shakey Graves carried a drum in a suitcase, Third Eye Blind didn’t look like that old album cover but they sounded like I remember. The most impressive showing was the big finish – with David Guetta perched on his tower with thousands of people waving Absolut Vodka light sticks, dancing on the dead prairie grass below.