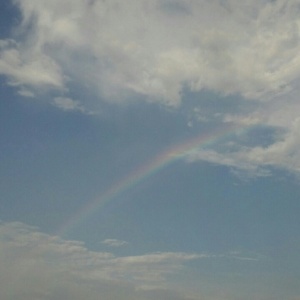 One day, I’ll let you wonder at the place and time, I was waking up extraordinarily hung over. The wall of guilt was dwarfing me as I tried to get my bearings. It was one of those mornings when I woke up earlier than normal, because I felt too bad to keep sleeping. Thom didn’t open his eyes when I kissed him goodbye. I thought that he was too disgusted with me to care that I was leaving. It wasn’t worth the effort to him to stir.

I think we were out separately, or maybe we’d been in the same place but he left before I did. I didn’t do anything terrible, I had just spent my money having a good time, and I felt irrationally bad about it. In all fairness, I refer to the wall of guilt because I named it that when I was approximately four. I’ve always felt irrationally bad about things, and everything, and nothing.

I was driving to work, with no sunglasses dark enough. I let the ipod play, on shuffle, not thinking about the music. I wanted to cry, because I felt so stupid, for having thought for a few hours that blowing off steam was worth the love I had lost because of it. I wanted to go back, before he was so disgusted with me.  Then “Daughters of The SoHo Riots” by The National started to play.

“”You must have known I’d do this someday…

Break my arms around the one I love,

and be forgiven by the time my lover comes,

Break my arms around my love.

Break my arms around the one I love,

And be forgiven by the time my lover comes,

Break my arms around my love.”

I don’t know what it means to Matt Berninger, I don’t know whether or not I understand any of the references. I realized that Thom still loved me, and he wasn’t really disgusted and apathetic towards me. He was just tired. He was just asleep. I felt bad, but he was probably just happy that I had a good time. I thought about all the worst things I’d ever done, and about how he had forgiven me all those things too. The wall subsided. I felt a wash, like the rise and fall of the water at Forbes lake when I was a kid. Tears falling all the way unchecked, like they did in the past, staring at the lights of an oil rig. I remembered exactly the tangible feeling of Thom’s arms around me, the smell of him. I thought that I could be forgiven. I knew that I had been, before. Somewhere in the back of my head, in a nonspecific thought that didn’t solidify until later, I was grateful that in our life he didn’t always ask me to be the forgiver. I didn’t want to ask it of him.

I know what the song means to me.

I decided to write a series of post on love, etc., somewhat in honor of Valentine’s Day. I’m not doing this because I’m a Valentine’s Day super fan or anything, but rather because its easy to write about what I see around me and what it reminds me of.  These posts will have varying degrees of seriousness. This is post #4, the last one.