On the last day of a press stop in Sydney, a friend and I woke up early to do the Bondi to Coogee coastal walk in a mad rush before our flight home. I wasn’t confident it would be a must-do; I’d seen oceans before, but the drama of cliffs jutting out of beaches, the alienscape of white rocks, and the stark contrast to being in the thick of Sydney made these few hours probably my most vivid memory of that trip. Waverly Cemetery sits along that walk, perched high up on the cliffs, white stones stabbing into the sky.

Because of the limited time we had to see it, and the distance we had to cover to get to a viable place to Uber out in time, I didn’t take as many pictures, or discover this cemetery as thoroughly as I generally like to. I had no idea the scale of the cemetery until I saw an arial photo of it later. I did determine that its still “working” though – there was a new hole going in as we passed by. 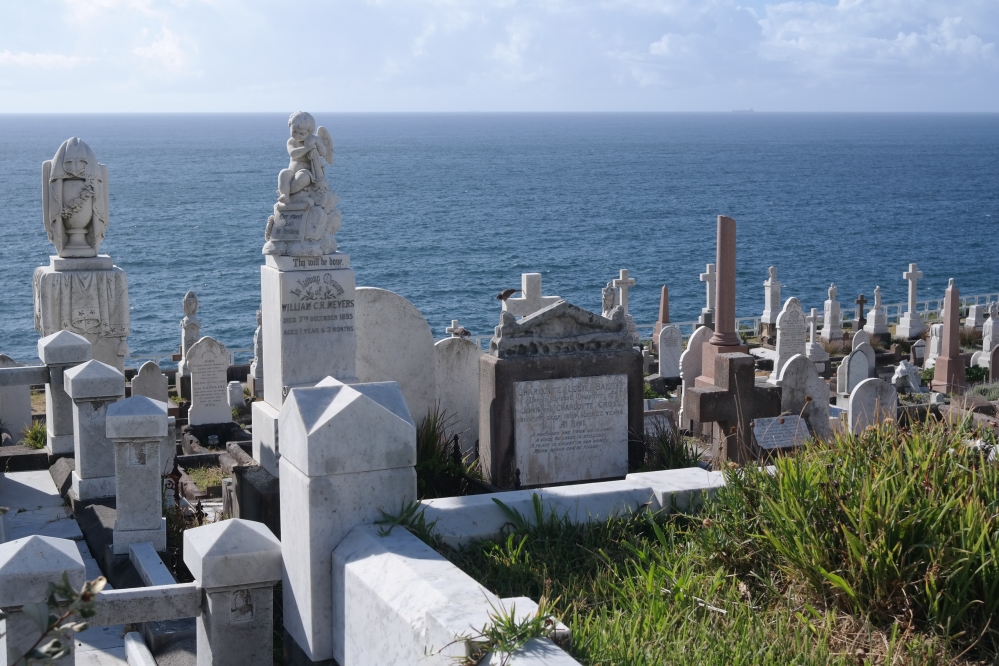 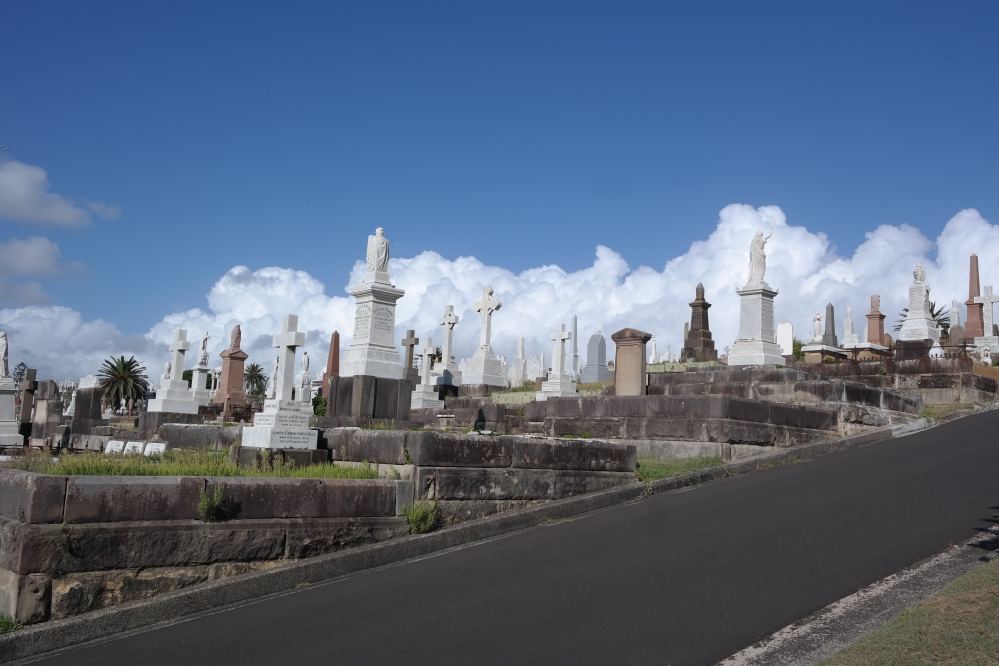 On that day the fluffy clouds provided a curtain behind the stones, white clouds and white stones between blue sky and blue water. 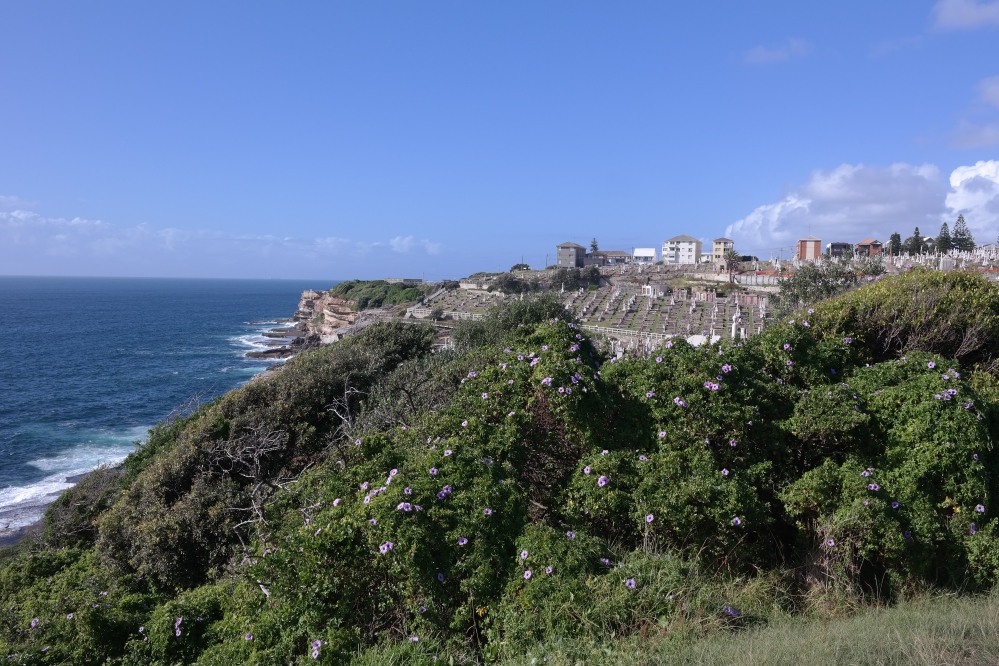 From some angles the cemetery looked deceptively haphazard, more like the less planned country cemeteries, but from the side the strictness of the rows appears.

There’s something novel to me about seeing headstones mixed in with the unfamiliar, more warm-weather palm-like trees. I suppose that the way I picture a grave yard at first association is still more like my childhood cemeteries, framed with woods made of oak and pine and maple and all of the things that grow through four seasons and too much water.

I had the thought that the cemetery looked so.. stubborn – jutting into the sky at the edge of the world. That’s a bit of my impression of Australia in general, from the brief exposure that had. It seems like its a place entirely built from the determination of people to just stand like stone walls in a harsh place. 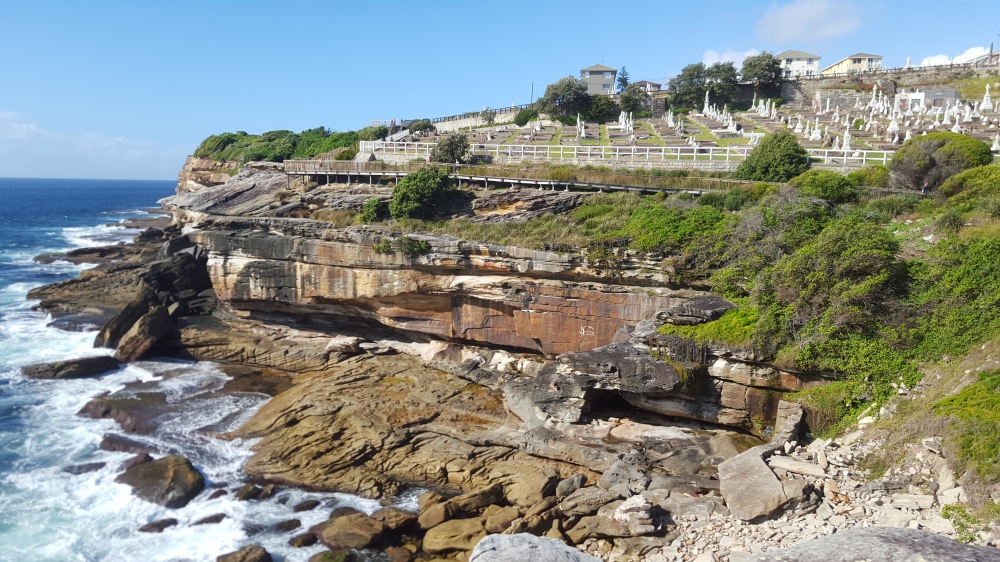 I learned after the fact that the cemetery dates to about 1877, so about forty years after Brompton and the rest of London’s Magnificent Seven. (No reason why I might bring that up, totally not a spoiler…)

Of the stones that weren’t white, many of them were what appeared to be a brown to red-brown stone. I’m not sure what this is, and I really haven’t seen it commonly used in other places. I wonder if its a common local stone, or maybe its not a stone at all but some sort of concrete-like material? I didn’t stop to inspect any of them very closely.

I wish I would have had more time to wander through this one, but the day was hot, and we didn’t know how quickly we would be able to progress through the rest of the walk to Coogee. Especially now that I know the size of Waverly, I have the idea that there’s something there to find that I didn’t find.