Skip to content
Anita Sarkeesian routinely says one thing at least that I agree with: that it is possible to find something problematic, yet still enjoy it. I’ve searched my soul, and I really don’t think this is one of those times. 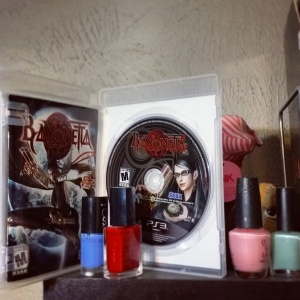 I loved Bayonetta. The gameplay, the aesthetic, the story (I know some people will say it’s not there, but I read all the lore books). I saw myself in Bayonetta, I saw a sense of humor in her, I wrote extensively at the time on why I didn’t find her to be a sexist caricature. It’s hard to fathom that something that feels so made for me – including outfits that are similar to things I’ve designed- is considered blatantly, obviously, no-room-for-discussion sexist by others. Even despite passing the Bedchel test!

But I’m not here to argue again the points I’ve already argued for Bayonetta – I’m sure I’ll do that after I play the second one if my opinion doesn’t change. Instead is rather just share a moment that came to mine earlier as I watched Erika Szabo (@ErikaSzabo) take heat on Twitter for disagreeing with Sarkeesian’s stance on Bayonetta…

I downloaded the demo for Bayonetta on the recommendation of Chris “Captain Redbeard” Wiseman (@RedbeardCaptain). I was instantly in love with the game’s madcap badassery. Bayonetta had me at hello with the over the top outfit, trademark glasses, and her humorous embrace of sexy schtick. I am hard pressed to think of another time I thought a game was so made with me in mind. I know she’s not sentient, she doesn’t actually ACTUALLY have agency.. But she always seemed to drop her lines like someone so clearly in on the joke.

And then.  I jumped. Bayonetta landed lightly on her saltamontes legs, and a cloud of butterflies floated up where ordinarily dust might be. Pink and purple, and girly as all hell. I admit that when I was younger, I had the problem of categorizing girlie things as weak or silly for no reason other than that they were girlie. At this point I was basically past that, and I was so good at checking myself for it that I also checked everything else. And Bayonetta ‘s jump was the first time I can remember seeing something in a videogame that was so girlie, and so not sorry, and didn’t at all make fun of its character’s girliness, or use it as a demonstration of weakness or softness. Bayonetta’s butterflies were a girlie bomb power fantasy to me. I stopped and jumped again. “Holy shit,” I thought to myself, “that’s girlie as hell and I love it!”

Thom bought me the game for Valentines Day that year. I played until I couldn’t properly move my hands.

***
(Because the internet may or may not be dumb, instead of dropping the mic, I end this blog with the note where I spell everything out. The title may or may not be a troll; or may or may not be an allusion to the vernacular of our times. I do not think that Anita Sarkeesian should be harassed or threatened. Nor do I think that it should be assumed that all women agree with all of her assessments. Nor do I think people should be harassed for not agreeing with her, or afraid to not agree with her.  The point of this blog is not that I am encouraging anyone to flame any0ne, but rather that you should marvel at the wide spectrum of opinions that women can have. Is it weird that I had to say that?)